In the US, approximately one out of every twenty adults ages 18-80 is taking medication for insomnia or anxiety, according to a study published in February 2015 in JAMA Psychiatry.

This medicine is called benzodiazepine, and there is a rise of overmedication and even abuse especially among older people, as they are three times as likely to have been prescribed these medicines for anxiety or insomnia as younger adults.

Benzodiazepines, which are sedatives, work in a person’s central nervous system by slowing down the brain, and this effect also leaves an overall feeling of drowsy pleasantness.

The main purpose of Benzodiazepines is to decrease someone’s anxious and tense emotions and to bring about drowsiness so they can get some sleep. They are available legally in pharmacies as prescription medication, but one can also obtain them illegally.

Over time, people’s bodies develop tolerance to the drug and end up needing greater and greater doses to achieve the same calming effect, which is why benzodiazepines come under the category of most abused drugs in the US.

Common benzodiazepines are Valium (diazepam), Xanax (alprazolam), Restoril (temazepam), Halcion (triazolam), and Librium (chlordiazepoxide). Some of these medications have been around for many years.

When taken beyond the prescribed dosages they cause people to experience euphoria (feeling high) or can have the same effects as the consumption of alcohol. A considerable period of sleepiness follows this “high” or “buzz.”

When a person uses benzodiazepines beyond the recommendation of his or her doctor, this is considered abuse of this substance.

Benzodiazepines usually come in pill or tablet form, and people who are addicted to them at times crush the pills and snort them to make the effect of the medication more powerful.

Snorting benzodiazepines makes an overdose more likely. And, because these drugs slow down brain functions, overdosing on benzodiazepines can result in seizures and comas.

Benzodiazepine overdoses can also cause a person’s breathing and heart rate to slow down to alarming rates, sometimes resulting even in death.

Because they are prescription medications, sometimes benzodiazepine users and their families fail to recognize the possibility that these medications are addictive and there can be a chance of abuse.

Every healthcare provider must take the time to make this very clear upon prescription, and discuss the possible symptoms of abuse 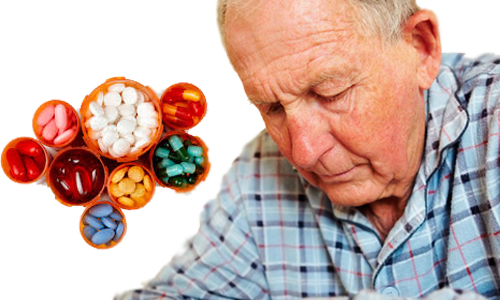 As mentioned earlier, older adults are more susceptible to anxiety medication abuse due to their changing health needs. About 7.4 percent of adults aged 51 to 64 and 8.7 percent of those aged 65 to 80 are more likely to have been prescribed anti-anxiety or insomnia medicines, according to the same JAMA Psychiatry study cited earlier.

When some people grow older, they are more likely to suffer from sleeplessness, so to help them sleep doctors sometimes prescribe benzodiazepines.

Older patients are also at the age when they face challenging life events such as the death of a spouse, siblings or close friends, and so may need help in dealing with anxiety or even depression.

Anxiety Medication Combined with other Substances

One study showed that almost 95 percent of people who got admitted to the hospital for benzodiazepine overdose were abusing at least one other substance.

People who have abused benzodiazepine, a sedative, often combined them with cocaine or methamphetamine, a stimulant. They would use benzodiazepine for falling asleep after coming down from a high.

Other users also mixed benzodiazepine with alcohol, which also has a sedative effect, or with opiate drugs to amplify their “high.” This practice of mixing benzodiazepines with illegal drugs heighten the possibility of an overdose that could be fatal.

Quitting benzodiazepine cold turkey is inadvisable as this could lead to a withdrawal that could have serious consequences.

The best first step after recognizing addiction and making the decision to stop is to talk to the doctor who prescribed the medicines. He or she should give you a schedule for tapering the dosage of the medications.

Getting to any underlying cause of the addiction is also essential. It is vital to understand the reason why the patient experienced anxiety and insomnia in the first place and to work through them via some form of therapy or counseling.